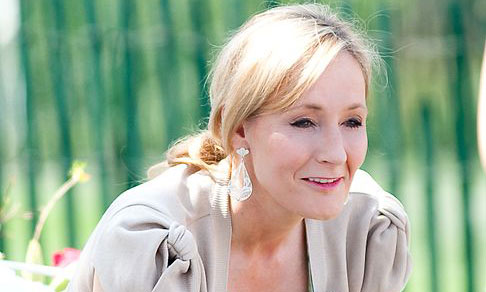 J.K Rowling is your typical rags to riches tale.  From living on government aid as a single mother for many years, the writer of the popular Harry Potter endured many rejections from multiple publishers. Her endurance paid off when Rowling became almost an overnight success. She became among the most successful authors in the world’s history. On several occasions, Rowling admitted of being the greatest failure she knew, at least by the conventional standards.

Rowling’s childhood was a difficult one. She was born in July 1965. She grew up in Gloucestershire, England. They later moved to Chepstow in south east Wales. She was born of impoverished parents who did not even go to college.  Her dad was an aircraft engineer in Bristol while her mother was a science technician at Wyedean Comprehensive. This is where Rowling attended school. Rowling’s mother was however diagnosed with multiple sclerosis. Sadly, she died in 1990.

Growing up, Rowling was surrounded by books. She knew she wanted to become a writer right from a young age. The first book she ever wrote was titled Rabbit. She was only six. At the age of eleven, she wrote a book on seven cursed diamonds and the people who owned them. This was the first novel she ever wrote.

J.K Rowling Studied at Exeter University. Her passion for reading grew even further here. At one point she incurred a fine for having books overdue. She read widely, beyond her Classic and French Syllabus. She acquired extensive knowledge of Classics which later came in handy when she was writing Harry Potter.

The idea of Harry Potter came to her while she waited for her delayed train in 1990. She was traveling from Manchester to London King’s Cross. She traveled abroad seeking to escape her grief after the loss of her mother. She mapped out the various series over the next five years of her life. She wrote in longhand and ended up amassing a bunch of notes. These she took with her even as she moved to Portugal to teach English. She got married and had a daughter in 1993.

Sadly, her marriage was over that same year, and she went back to Edinburg in the UK. This was a rough patch, being a single mother to a newborn baby and being unable to find employment. She had to live on welfare.  She continued to write her book while she cared for her baby. Over time, this life got her feeling drained and had no energy to do anything else, except for her writing and caring for the little girl. She was unable to do any housework, do healthy eating or do anything else that was important. This life made her clinically depressed. At some point, suicidal thoughts came to her. She questioned if Harry Potter was worth all this.

Rowling battled her logic side. As a new author, she knew that publishing the book was not going to be easy. As much as she thought Harry Potter was a great story, she knew that it did not guarantee that other people would. To stay motivated to keep writing, she knew she had to really believe in Harry. She had to give the book the justice it deserved. It was bigger than she was

After the manuscript was complete, a new struggle began. Publishing Harry Potter. Twelve of the highly renowned publishing companies rejected her. Finally, she found a publisher who was willing to give her a chance. Bloomsbury bought the publishing rights for Harry Potter for $4000. This, Rowling describes as her best life moment. Her dream was going to come true. She was going to print after five long years of writing. Harry Potter became a hit immediately after it got to the shelves. It was so huge that publishers in the United States began to bid war for it. Ultimately, Scholastic publishing purchased the publishing rights for over $100,000. This figure was above and beyond what they had ever given any author. Harry Potter continued to grow over the next decade and a half and became the most successful book and movie series in history.

Rowling is living proof that regardless of how difficult your situation becomes, having the right attitude can help you cause things to change and take a positive direction.

Here are key factors to help you build the right attitude.

Rowling’s dream did not waiver, even when her parents thought her dream of becoming a writer was preposterous and could not put food on the table. She also put everything else aside, even her health and housework and focused on writing. Even when she wondered if it was all worth it, her mind and heart stayed resolute in finishing her book.

When you are passionate about something, or you have a dream, rejection and failure should not stop you from pushing on. If you are working on something you believe in, giving up is not an option. If Rowling had given up after so many rejections by publishers, she would have never known what she could become.

Often, we tend to give up when things don’t go our way.  We look around at our circumstances and think maybe we are not meant for greatness. Rowling’s story shows us the importance of determination.  You may not have control over your situation or circumstances. But you can take control of the decisions you make and your actions too.

Rowling gathered the willpower to continue writing when things got tough. Even with her depression, she decided that Harry Potter was Bigger than her.

J.K Rowling experienced many setbacks in her life. Her impoverished background, the death of her mother, a failed marriage, and even joblessness while she had a newborn baby to care for. Despite the stumbling blocks, she found comfort in doing what she loved. She also realized that the little she had was sufficient to be fairly happy. She made the best of her situation and wrote the book that became her door to success.

Want Oprah’s Secrets to Success? Keep Reading to Learn How You Can Live Your Best Life!

How to Stay Strong When the Going Gets Tough: Take a Tip from Trevor Noah!