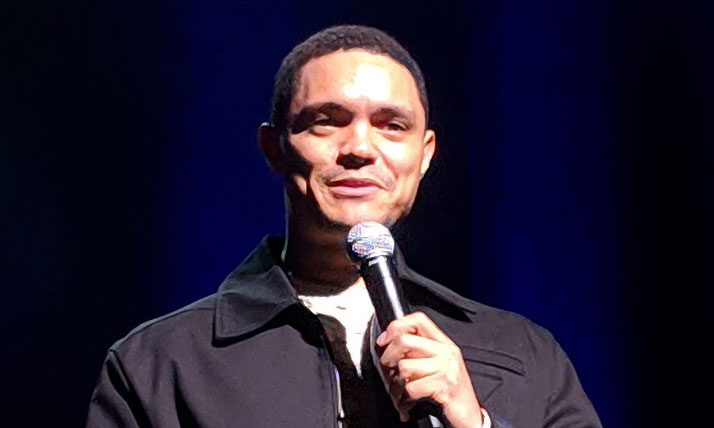 Trevor Noah was born a crime. He was born of a white father and a black mother. Any relationship between those two races was deemed illegal, punishable by law. Having a mixed race child was illegal. Trevor Noah has risen from the period of apartheid in South Africa to the host of the internationally popular show, The Daily Show, previously hosted by Jon Stewart. He is also a successful standup comedian, writer, producer, and actor. If you really want to know all about Trevor Noah, his book Born a Crime is a good place to start. So many words can be used to describe him. He is prodigious, cheeky, sharp and hilarious. He’s a funny man Trevor Noah. His story is inspirational. Remarkable really.

Trevor was born in Soweto South Africa in 1984. He was born during the Apartheid period when the birth of a mixed race child was a criminal act. His mother Patricia was a black Xhosa while his father was a white Swiss. Trevor gives his life story in his book Born a Crime and explains how it was living in South Africa during the apartheid period. The memoir provides a vivid description of the social-political state of South Africa during the Apartheid period. It also explains the changes in the political situation from apartheid to democracy. The apartheid influenced the sociological situation in the country. It led to the fragmentation and division of people across race and as language. In one instance, Trevor talks about his mother having to act as his maid while out in public to avoid being jailed. Noah exemplifies how connotations attributed to race are socially built, and the way social mechanisms for instance law, work to construct, produce, and strengthen socially assigned meanings of race.

Trevor attributes his success today to his life growing up and his mother, a fearless independent lady who stood by him and nurtured him. He explains that his mother taught him the most significant life lessons. She insisted on Trevor endeavoring to be more than he thought he could be and doing more than he thought he could do. She talked to him about the necessity of trying to live in an area where he did not feel totally comfortable. She said that this would help him achieve true growth.

Trevor says his mother was not a believer in the norm. She always found ways to maneuver her way around the system. She was not limited by people’s opinion on what they believed she could or could not do. Even at one point when Trevor’s stepfather shot her in the face, Patrica’s spirit was not killed. She never held on to the pain of her experiences

Trevor had to stay indoors during his early childhood since he was proof of his parents’ indiscretion. His mother was afraid that the government would take him away from her at any time and she would face punishment. After the tyranny of the white rule in South Africa, Trevor and his mother started living freely taking advantage of the opportunities available after years of the long struggle.

The feeling of belonging or not belonging to a specific race may influence the well-being of particular individuals. A facility may classify a biracial individual in a particular way for diversity quotas. However, if the person does not identify with the group they are linked to they may feel stereotyped or constrained. In general, biracial individuals are classified as belonging to the racial group of the minority parent. Racial classification of biracial people as black is linked to the “one drop rule” which is a racist law that prescribed that even a very little extent of black descent meant that the person was black. For centuries the one drop rule also known as hypodescent was legal in the United States. Trevor illustrates how he had a problem fitting in- he was too white to be identified as black and was regarded as black by the white community. Even on the family level, he found himself being given more privileges than family members on his mother’s side, including his mother, and lower privileges on his fathers’ side compared to the white family members. Trevor’s story sheds light on how people who are biracial have a hard time identifying with a specific race.

In some instances, Trevor finds himself needing to decide his identity assertively. He had to choose to which side he belongs. He explains that even when you say you don’t pick sides, life puts you in situations you have to. But Trevor believes the side you have to choose is the side of being a good person and a decent human. He believes that communication cut beyond layers of conflict. People will relate to you better when you speak their language. On one instance, he overheard a group of young men talking about mugging him. But when he spoke to them in their language, that changed and they became chummy.

On several occasions, Trevor also talks about the relationship between success and hard work. The two cannot be separated. Trevor, says that he works hard on things he enjoys doing and those he is good at. This way work does not feel like work.

Trevor did not let his tough life growing up limit him from rising to great heights. His mother did not let her minority color hinder her from doing anything she wanted to do. Many people can relate to his story, especially about being treated differently on the basis of their gender, culture, language or skin color. He sets a clear path that we must use whatever situation we are in and create the best of it. Trevor and his mother could have given up. They could have decided to let the difficult apartheid period limit them. But they lived a happy life even when things got tough.

What insightful lessons can we learn from Trevor Noah’s Story?

These tricks should absolutely work for you, but if what you’re really looking for is a way to boost your success and confidence, you can head over to my site, www.instantkharismaseminar.com for life coaching and confidence training! I’ve helped thousands of people just like you to unlock their full potential and I can do it for you too! Wondering how? For the full story, you’ll have to check out my site, but basically… I teach you how to use your body language to sell more products and services- no matter what line of work you’re in! I’ll show you how to make a greater impact and skyrocket your influence even if you hate public speaking or feel awkward in front of a camera! If that sounds like what you need, then what are you waiting for?? Let me help you yourself today!

Want Oprah’s Secrets to Success? Keep Reading to Learn How You Can Live Your Best Life!

Attitude is Everything; How things Turned Around for J.K Rowling